HOW “POKÉMON GO” BECOMES A BIG HIT, AND WHY YOU SHOULD CARE

HomeNewsHOW “POKÉMON GO” BECOMES A BIG HIT, AND WHY... 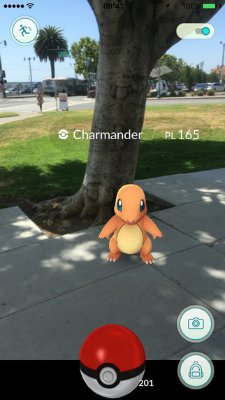 “Pokémon Go”, launched only 1 week ago in US, Australia and New Zealand, has already taken the world by storm, and the number of users has already surpassed Tinder, and even Twitter by some measure.  It’s been closely followed by video game media outlets, the tech community, and mainstream media at large.

It’s a smartphone game that uses AR (Augmented Reality) technologies.  A player needs to catch and collect these cute monsters called Pokemon.  To discover and catch them, he/she needs to walk around the real world.  e.g. The player walks to the local town square, and the game, using smartphone’s GPS location, will know that the player is now at the town square, and will then show a monster, and allow the player to catch.

WHY IS IT SO POPULAR?

– It’s different.   Compared to most other video games that you play sitting down and indoors, Pokémon Go let players go out and about to play outdoors on their smartphones.

– It’s easy to pick up, and easy to learn.   The gameplay is simple, and it’s free to download, therefore attracting players in different demographics.

– It’s real-world social.   Many players can go to the same town square, and will see the same monster.  You can gather your friends and go on a Pokemon-seeking trip together.  While at the same time, you can also choose to start playing and learning by yourself at your own pace.

– Nostalgia of a very strong and popular cartoon franchise.   Pokémon was very popular among kids 20 years ago, and now many of those kids are grown-ups who are eager to revisit this childhood favourite.

– The gameplay of treasure hunt is evergreen.   The game of exploring and treasure hunting is intuitive and fun, and children and adults alike can perfectly relate to it.

WHY YOU SHOULD CARE

The success of the game, with its limited launch to only 3 countries, is already bringing in US$1 million revenue per day.   It’s an amazing case study of how to engage with your customers and your fans, reinvigorate your brand, and create a media phenomenon.

– Bring interactivity and fun to customers.  AR blends the real world with the virtual world, and this technology, with the right gameplay, can make any toy and any game more interesting.   Brands like Coca-Cola have also been using AR to enrich user engagement via interacting with their product packaging and printed advertising.   And, all these can be achieved without requiring anything additional:  if you have a smartphone, you have access to it.

– Enable new business models:  generate extra revenue via in-app purchases, virtual goods, and cross-selling.   Pokemon Go has already achieved US$1 mil / day of revenue, and you can learn from that too.  Using a toy example, a toy company can create a corresponding app that can be played together with a physical toy, enriching the gameplay.  At the same time, the smartphone app can offer virtual upgrades and digital goods via the app to create an additional revenue stream.  And, when the next toy launches, the toy company can alert the players to pre-order, to view the video trailer, etc.

– Establish a direct sales & marketing channel to your customers, via a mobile app.   The Pokemon franchise had video games, trading cards, toys, and other goods, but most of which will require distributing them via traditional distribution channels like toy stores and department stores.   If Pokemon Go were a board game, it would have probably needed to fall into a traditional toy distribution yearly cycle:   negotiating with retail chains as early as one year ago, in preparation for the pre-Christmas season.  But a mobile app can allow the Pokemon franchise, to launch new in-app products whenever it wants, and have direct reach to consumers instead of going through many stops in a distribution.  Such practice can also be applied to your brand too.

– Leverage your brand and IP. Pokémon is no doubt a valuable brand and franchise, and they are already continually creating value from their IP via traditional means like cartoons, merchandise, video games, etc.   But the Pokemon Go game wisely leveraged AR technology, to unlock even more value from their brand, created a category-defining mobile game.    It’s an endeavour of a huge scale, but other brands can also use the AR technology in a smaller scale.  One such example would be: allowing customers to take selfies of real-world products with virtual mascots & artwork, and share them on Facebook, Instagram or other social media.

THE “POKÉMON GO” PHENOMENON WILL BE MORPHING, BUT REMAINS INTERESTING AS IT UNFOLDS

It has just been the first week of this phenomenon, and it is already changing people’s behaviours in society:  e.g. traffic accidents, or crowds gather at your doorstep, or surge in visits to national parks.   As more of the mass market adopts, the game and its players will definitely continue to evolve, and there will be more interesting lessons to be learned.